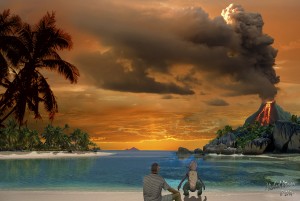 In the above illustration there are numerous elements. The sunset is the background layer. The smoke from the volcano overlays that. There is a distant island on the horizon. Trees, beach, volcano, lava, lagoon, alien and human are all separate elements. Crafting such scenes can take several hours to a dozen. Cost on some illustrations could exceed $500. Most illustrations for books are typically more cartoonish, thus simplifying the process for lack of detail. There are many programs suited to producing illustrations that are probably better than Photoshop, but for photo realism, Photoshop is hard to beat. 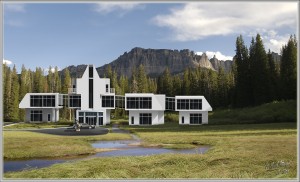 The home in the above illustration is of my own design. I created the entire structure defined filling areas, and then adding photographed elements such as windows. The landscape in an area north and west of Dubois, Wyoming. The foreground is a stream from another location. 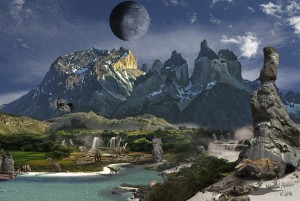 There are dinosaurs galore in this illustration, which is supposed to represent Viridian, an alien world from my novel Silent Landing. The mountains, waterfalls, and other rock formations are made up of a half dozen layers, with at least a dozen more layers with detail elements including the beasts. 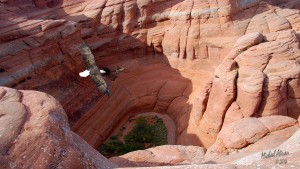 This is my opening illustration from my novel Silent Wave. The bowl is from an area near Arches National Park, somewhat south and east from Klondike Bluffs, but outside the park. The only additional layers are the eagle and two people, so some illustrations are fairly simple if you have the shot.